Caught In the Loop? Awk While, Do While, For Loop, Break, Continue, Exit Examples 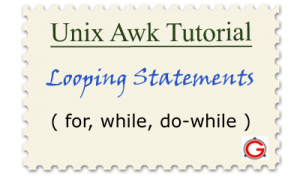 In this article, let us review about awk loop statements – while, do while, for loops, break, continue, and exit statements along with 7 practical examples.

How it works? — Awk while loop checks the condition first, if the condition is true, then it executes the list of actions. After action execution has been completed, condition is checked again, and if it is true, actions is performed again. This process repeats until condition becomes false. If the condition returns false in the first iteration then actions are never executed.

1. Awk While Loop Example: Create a string of a specific length

The above example uses the ‘BEGIN { }’ special block that gets executed before anything else in an Awk program. In this block, awk while loop appends character ‘x’ to variable ‘string’ 50 times. count is a variable which gets incremented and checked it is less than 50. So after 50 iteration, this condition becomes false.
After it has looped, the ‘string’ variable gets printed out. As this Awk program does not have a body, it quits after executing the BEGIN block.

Even if the condition is false, at the beginning action is performed at least once.

2. Awk Do While Loop Example: Print the message at least once

Awk for statement is same as awk while loop, but it is syntax is much easier to use.

3. Awk For Loop Example . Print the sum of fields in all lines.

4. Awk For Loop Example: Print the fields in reverse order on every line.

We discussed about awk NF built-in variable in our previous article. After processing each line, Awk sets the NF variable to number of fields found on that line.

The above script,loops in reverse order starting from NF to 1 and outputs the fields one by one. It starts with field $NF, then $(NF-1),…, $1. After that it prints a newline character.

Now let us see some other statements which can be used with looping statement.

Break statement is used for jumping out of the innermost looping (while,do-while and for loop) that encloses it.

5. Awk Break Example: Awk Script to go through only 10 iteration

The above awk while loop prints the string “forever” forever, because the condition never get fails. Now if you want to stop the loop after first 10 iteration, see the below script.

In the above script, it checks the value of the variable “x”, if it reaches 10 just jumps out of the loop using break statement.

Continue statement skips over the rest of the loop body causing the next cycle around the loop to begin immediately.

In the above script, it prints value of x, at each iteration, but if the value of x reaches 5, then it just increment the value of x, then continue with the next iteration, it wont execute the rest body of the loop, so that value of x is not printed for the value 5. Continue statement is having the meaning only if you use with in the loop.

Exit statement causes the script to immediately stop executing the current input and to stop processing input all the remaining input is ignored.

Exit accepts any integer as an argument which will be the exit status code for the awk process. If no argument is supplied, exit returns status zero.

7. Awk Exit Example: Exit from the loop at 5th iteration

In the above script, once the value of x reaches 5, it calls exit, which stops the execution of awk process. So the value of x is printed only till 4, once it reaches 5 it exits.