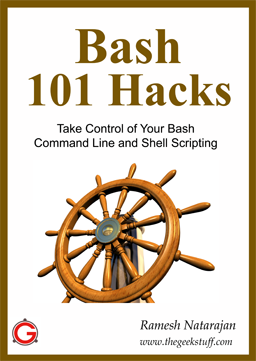 When you are working on a Linux environment, does any of the following sound familiar to you?

What is inside the eBook?

This eBook is the only guide you’ll ever need to learn Bash. I promise that it will help you understand everything you need to know to become a master in the Bash command line and shell scripting.

This book contains a total of 276 pages with clear instructions and numerous examples.

Who should use this eBook?

This book is for newbies or intermediate users of Bash who would like to become an expert in both Bash command line and shell scripting.

This book is for Developers, Linux sysadmins, DBAs, Network Administrators, and IT Managers who spend a significant amount of their time on Linux platform and would like to take advantage of the powerful Bash to make their life easier.

I’ve been using Bash for several years, and I automate pretty much everything using Bash shell scripting.

How can Bash help you?

Even when you don’t have to write a single line of shell script (which is not practical for most developers and sysadmins), you still need to understand the fundamental structure of Bash programming language, as most of programs and startup scripts are written in Bash shell script, which you might end-up debugging for various reasons.

How much does the eBook cost?

An investment of just $39.95 for this eBook will change the way how you work on the Linux Bash command line forever. You’ll not fear writing a shell script ever again.

Easily a $25 value for ABSOLUTELY FREE! (For a Limited Time Only)

If you are not satisfied with the Bash 101 Hacks ebook, just let me know and I’ll refund your money — that’s how confident I am that this book will help you learn and master Bash command line and shell scripting.

Just think! At 39 cents per hack this book will change the way you work on Bash command line and help you write a shell script quickly to satisfy any of your requirement. Also, this eBook will serve as a permanent reference for all your Bash needs. Click here to get your Bash 101 Hacks eBook NOW!

Get all Three 101 Hacks eBook with Additional 20% Discount

For a limited time, an additional 20% discount is offered, when you purchase all three 101 hacks eBooks (Bash, Sed and Awk, and Vim).

Click here to get all 3 eBooks with additional 20% discount.