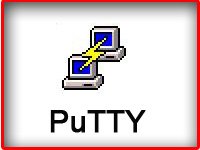 This article is part of on-going Software For Geeks series. PuTTY is hands-down the best, free, and lightweight SSH client for Windows. I have provided list of 12 powerful PuTTY add-ons with screenshots, that will solve few shortcomings of the original PuTTY.  Play around with these add-ons and choose the one that suites your need.

PuTTYCM gives a nice feature to arrange several PuTTY sessions in tabs . While starting PuTTYCM for the first time, you should specify the location of the original PuTTY. This requires .NET 2.0 to be installed on the windows system. Following screen-shot displays three putty sessions in tabs within the same window.

Note: If the PuTTY Connection Manager opens the original PuTTY in a separate window, instead of opening as a TAB, please go to Tools -> Options -> Select the check-box “Enable additional timing for PuTTY capture (ms)” -> set the value to 300 ms. This will open the PuTTY window inside the TAB as shown below.

Note: Refer to the PuTTY Connection Manager Tutorial for more details on the PuTTY CM features. 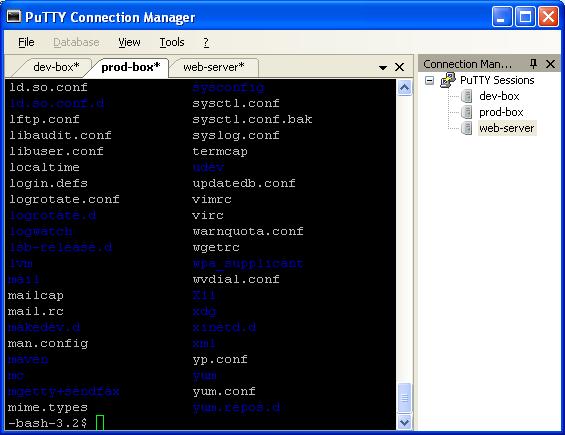 Cygwin users will absolutely love PuTTYcyg. This lets you use PuTTY as a local cygwin terminal. If you use cygwin on your windows, I’m sure you’ll hate the default MS-DOS looking cygwin window. Using PuTTYcyg, you can run cygwin inside PuTTY. I love this add-on and use it for my cygwin on Windows.

On PuTTYcyg, click on cygterm radio button in the Connection type. Enter – (hyphen) in the “Command (use – for login shell“, to connect to the cygwin on the windows laptop using PuTTY as shown below. 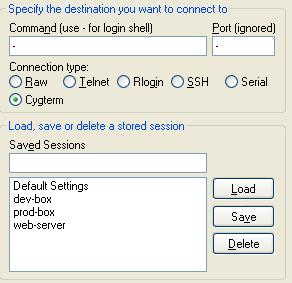 Using PuTTYtray, you can minimize the PuTTY window to the system tray on windows. By default, original PuTTY stores the session information in the registry. This is painful, when you want to transfer PuTTY sessions from one laptop to another. In PuTTYtray, there is an additional radio button “Sessions from file” as shown below, that will let you store session information in a file. 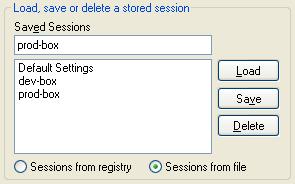 PuttyTabs provides a floating bar, that will display the open PuTTY sessions in TABs. Clicking on one of the tabs will bring the respective PuTTY session to the foreground. While starting PuTTYTabs for the first time, you should specify location of the original PuTTY. It reads the windows registry to get all the available PuTTY sessions. This also requires .NET 2.0 to be installed on the windows system. Following screen-shot displays three putty sessions arranged in tab.

Quest Software modified the PuTTY to add Active Directory (GSSAPI Kerberos) single sign-on feature. Quest PuTTY uses Microsoft’s Security Service Provider Interface (SSPI), which is Microsoft’s version of the GSSAPI, with which it is wire compatible. This version of PuTTY adds a new menu-item called GSSAPI, under Connection -> SSH, as shown below. 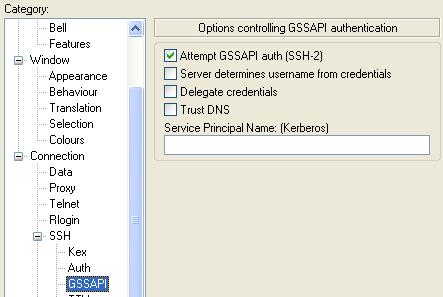 This modified PuTTY stores the PuTTY sessions in folder instead of storing it in the registry. If you already have sessions stored in the registry, it will display those also. The sessions stored in registry will be marked as [registry] as shown below. When you create a session using this PuTTY, this creates a sub-folder called session in the same folder where putty.exe is located, to store all the sessions in the file. 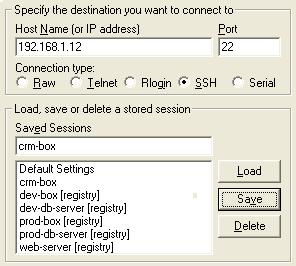 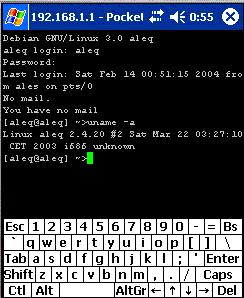 Note: If you are using blackberry phone, refer to Blackberry PuTTY Tutorial for installing and configuring PuTTY on blackberry.

portaPuTTY is a modified version of the PuTTY that stores the session information in a file by default, instead of storing it in the windows registry. The session files are stored under .putty/sessions folder. The .putty folder is created under the same directory where the putty.exe is located.

PuTTY Portable is part of PortableApps suite. Use this to launch PuTTY from the USB drive and carry the sessions along with you.

If you are using Launchy, the open source keystroke launcher for windows, you can use Putty Launchy Plugin, to launch putty sessions from Launchy very easily. i.e you can type “ssh” or “putty” followed by tab or space to list all of your PuTTY sessions. Once you select a particular session, Launchy will automatically launch that particular PuTTY session. 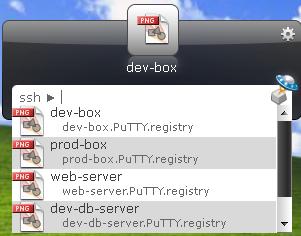 PuTTY Session Manager will let you organize the PuTTY sessions into folders and assign hotkeys. This requires Microsoft .NET 2.0. Right click on the PSM icon in the system track and select “Session Hotkeys” to assign hot-keys for PuTTY session as shown below. 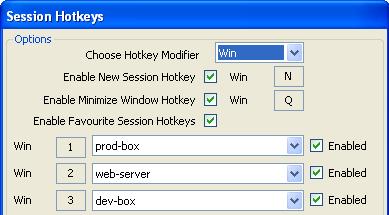 To create a folder, right click on a particular PuTTY session -> Session Management -> New Folder. To move a existing session to a folder, just drag the session and drop to the corresponding folder. 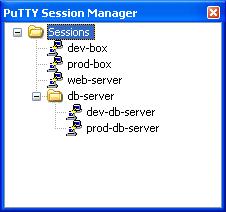 PuTTYCS is very helpful little tool that can boost your productivity by eliminating repetitive tasks performed on different servers. Using PuTTYCS, you can send a unix command to multiple PuTTY windows at the same time. You can use this to backup files, view log files, start and stop processes, copying file etc., on multiple servers, just by executing the command once, as shown below. 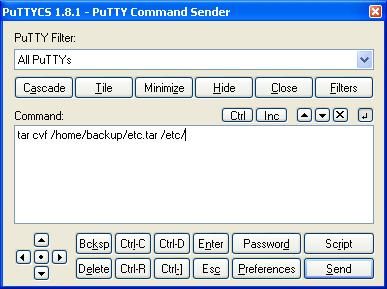 
If you liked this article, please bookmark it on del.icio.us and Stumble using the link provided below under ‘What Next?’ section.

Next post: How To Repair Corrupted MySQL Tables Using myisamchk