We are starting a new series of articles on VMware that will help you install, configure and maintain VMware environments.

Following are few reasons why you might want to think about virtualization for your environment.

On a high level, there are two ways for you to get started on the virtualization using VMware products. Both of these are available for free from VMware.

VMware Server runs on top of an existing host operating system (either Linux or Windows). This is a good option to get started, as you can use any of the existing hardware along with it’s OS. VMware server also support 64-bit host and guest operating system. You also get VMware Infrastructure web access management interface and Virtual Machine console.

VMware ESXi is based on the hypervisor architecture. VMware ESXi runs directly on the hardware without the need of any host operating system, which makes is extremely effective in terms of performance. This is the best option to implement VMware for production usage. 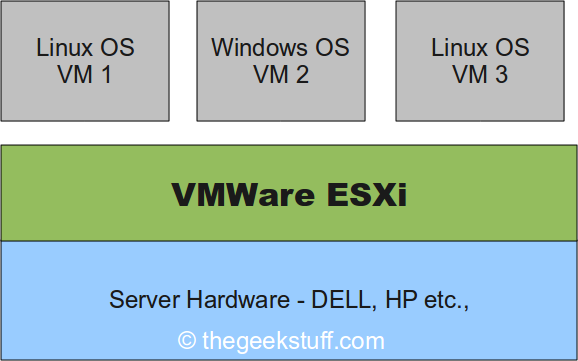 Following are some of the key features of VMware ESXi:

Next post: The Ultimate Bash Array Tutorial with 15 Examples

Previous post: Visual File Diff with Vimdiff – It Does Make a Difference!