How to Install and Launch emacs Editor on Debian / Ubuntu Linux

In the spirit of learning, we’ve decided to explore emacs editor in detail and we’ll be posting several emacs articles in the upcoming weeks.

In this article, let us review how to install Emacs editor on Ubuntu / Debian. We’ll also see how to do the basic operation of opening and saving a file in Emacs editor.

Check the version of installed emacs editor as shown below.

Type emacs at the command line to open the emacs GUI editor. 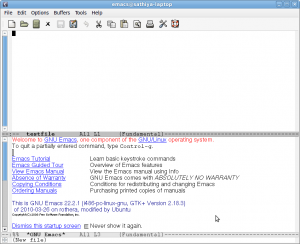 Fig: Emacs editor in GUI mode (click on the image to enlarge)

You can save and close the file using the menus available.

By default emacs will open in the GUI mode. Use -nw option ( no window ), to open emacs editor in text mode as shown below. 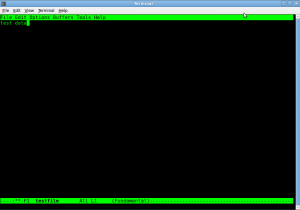 Fig: Emacs editor in Text Mode (click on the image to enlarge)

Save File and Exit Emacs Editor

If you are new to emacs editor, following are two things you should know.