Regular Expressions in Grep Command with 10 Examples – Part I 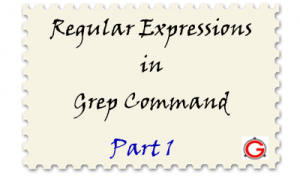 Grep command is used to search for a specific string in a file. Please refer our earlier article for 15 practical grep command examples.

This articles is part of a 2 article series.

Let us take the file /var/log/messages file which will be used in our examples.

In grep command, caret Symbol ^ matches the expression at the start of a line. In the following example, it displays all the line which starts with the Nov 10. i.e All the messages logged on November 10.

The ^ matches the expression in the beginning of a line, only if it is the first character in a regular expression. ^N matches line beginning with N.

Character $ matches the expression at the end of a line. The following command will help you to get all the lines which ends with the word “terminating”.

Using ^ and $ character you can find out the empty lines available in a file. “^$” specifies empty line.

The above commands displays the count of the empty lines available in the messages and anaconda.log files.

The special meta-character “.” (dot) matches any character except the end of the line character. Let us take the input file which has the content as follows.

Now let us search for a word which has any single character followed by ello. i.e hello, cello etc.,

In case if you want to search for a word which has only 4 character you can give grep -w “….” where single dot represents any single character.

The following example searches for a pattern “kernel: *” i.e kernel: and zero or more occurrence of space character.

In the above example it matches for kernel and colon symbol followed by any number of spaces/no space and “.” matches any single character.

If there is no space then it will not match. The character “+” comes under extended regular expression. So you have to escape when you want to use it with the grep command.

In the above example, the grep pattern matches for the pattern ‘hi’, followed by one or more space character, followed by “hello”.

If there is no space between hi and hello it wont match that. However, * character matches zero or more occurrence.

“hihello” will be matched by * as shown below.

The special character “?” matches zero or one occurrence of the previous character. “0?” matches single zero or nothing.

The line which has more than one space between hi and hello did not get matched in the above command.

The character class is nothing but list of characters mentioned with in the square bracket which is used to match only one out of several characters.

Repeated messages will be logged in messages logfile as “last message repeated n times”. The above example searches for the line which has any number (0to9) followed by the word “times”. If it matches it displays the line before the matched line and matched line also.

With in the square bracket, using hyphen you can specify the range of characters. Like [0123456789] can be represented by [0-9]. Alphabets range also can be specified such as [a-z],[A-Z] etc. So the above command can also be written as

Example 10. Exception in the character class

If you want to search for all the characters except those in the square bracket, then use ^ (Caret) symbol as the first character after open square bracket. The following example searches for a line which does not start with the vowel letter from dictionary word file in linux.

Previous post: Happy New Year 2011 – From Geek and the Doll