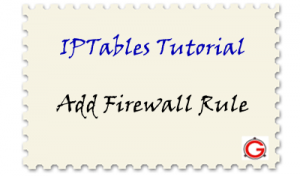 This article explains how to add iptables firewall rules using the “iptables -A” (append) command.

“-A” is for append. If it makes it easier for you to remember “-A” as add-rule (instead of append-rule), it is OK. But, keep in mind that “-A” adds the rule at the end of the chain.

Again, it is very important to remember that -A adds the rule at the end.

If you don’t know what chain means, you better read about iptables fundamentals first.

The following parameters are available for all kinds of firewall rules.

-p is for protocol

-s is for source

-d is for destination

-i is for in interface

-o is for out interface

Some of the above firewall parameters in turn has it’s own options that can be passed along with them. Following are some of the most common options.

Note: All of these options have two dashes in front of them. For example, there are two hyphens in front of sport.

–dport is for destination port (for -p tcp, or -p udp)

–tcp-flags is for TCP flags (for -p tcp)

–icmp-type is for ICMP Type (for -p icmp)

Now that you understand various parameters (and it’s options) of firewall rule, let us build a sample firewall rule.

In this example, let us allow only the incoming SSH connection to the server. All other connections will be blocked (including ping).

WARNING: Playing with firewall rules might render your system inaccessible. If you don’t know what you are doing, you might lock yourself (and everybody else) out of the system. So, do all your learning only on a test system that is not used by anybody, and you have access to the console to restart the iptables, if you get locked out.

If you already have some iptables rules, take a backup before delete the existing rules.

Test to make sure you are able to ssh and ping this server from outside.

When we are done with this example, you’ll only be able to SSH to this server. You’ll not be able to ping this server from outside.

The above iptables command has the following 4 components.

In simple terms the above rule can be stated as: All incoming packets through eth0 for ssh will be accepted.

3. Drop all Other Packets

Once you’ve specified your custom rules to accept packets, you should also have a default rule to drop any other packets.

This should be your last rule in the INPUT chain.

To drop all incoming packets, do the following.

4. View the SSH rule and Test

As you see from the above output, it has the following two rules in sequence.

Instead of adding the firewall rules from the command line, it might be better to create a shell script that contains your rules as shown below.

Similar to iptables append/add command, there are few other commands available for iptables. I’ll cover them in the upcoming articles in the iptables series. I’ll also provide several practical firewall rule examples that will be helpful in real life scenarios.

Previous articles in the iptables series: