AWK Vs NAWK Vs GAWK 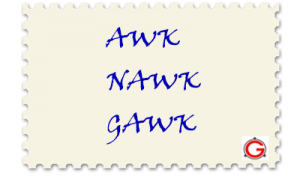 Awk is a powerful language to manipulate and process text files. It is especially helpful when the lines in a text files are in a record format. i.e A record containing multiple fields separated by a delimiter. Even when the input file is not in a record format, you can still use awk to do some basic file and data processing. You can also write programming logic using awk even when there are no input files that needs to be processed.

In short, AWK is a powerful language, that can come in handy to do daily routine jobs.

If you are new to awk, start by reading this Awk introduction tutorial that is part of the Awk tutorial series.

Learning curve on AWK is much smaller than the learning curve on any other languages. If you know C program already, you’ll appreciate how simple and easy it is to learn AWK.

The following are the three variations of AWK:

AWK is original AWK written by A. Aho, B. W. Kernighan and P. Weinberger.

NAWK stands for “New AWK”. This is AT&T’s version of the Awk.

GAWK stands for “GNU AWK”. All Linux distributions comes with GAWK. This is fully compatible with AWK and NAWK.

On Linux, typing either awk or gawk invokes the GAWK. awk is linked to gawk as shown below on Linux systems.

The following table summarizes the different features that are available in these versions. As you see below, gawk is the superset that contains all the features of original awk and nawk.

Awk Vs Nawk Vs Gawk

Download the Awk Vs Nawk Vs Gawk differences in PDF cheatsheet format.

The following basic built-in variables FS, OFS, RS, ORS, NR, NF, and FILENAME are available in all versions of awk.

All the following features are not available in the original awk. They are available in nawk and/or gawk as shown below.

Next post: How to Setup Nagios Checker Extension for Chrome and Firefox Browser

Previous post: 20 Tips to Simplify Your Digital and Online Life