Though TCP protocol is a connection oriented and reliable protocol but still there a various loopholes that can be exploited. These loop holes are mostly explained in terms of attacks.

In the previous article on the TCP/IP Attacks series, we explained about ARP Cache Poisoning.

An overview of TCP

Before getting started with explanations of attacks. Lets develop a basic understanding of how TCP works. 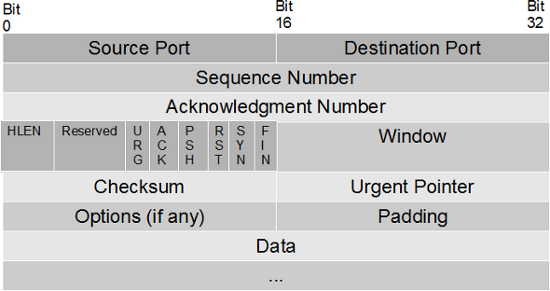 The below explanation explains how a connection is established between two hosts at TCP level. This is known as three way handshake. This handshake is required before any kind of data can be sent in each direction. Once the connection is established, data can flow bi-directionally with each packet containing sequence number of beginning byte of data it contains and acknowledgment of data received.

So we see that sequence numbers play an important role in TCP communication. A sequence number is a number that TCP associates with the starting byte of data in a particular packet. This way the receiving TCP keeps track of data received and acknowledges accordingly. The acknowledgment number is always the next expected sequence number.

Suppose Host A and Host B are communicating with each other. Now, lets say an attacker sitting in between is somehow able to monitor the packets between A and B.

Lets see what the attacker does :

So this way a connection can be hijacked by an attacker.

Another way could be the prediction of ISN(initial sequence number).

When new connections are created, an initial sequence number (ISN) generator is employed which selects a new 32 bit ISN. The generator is bound to a (possibly fictitious) 32 bit clock whose low order bit is incremented roughly every 4 microseconds. Thus, the ISN cycles approximately every 4.55 hours. Since we assume that segments will stay in the network no more than the Maximum Segment Lifetime (MSL) and that the MSL is less than 4.55 hours we can reasonably assume that ISN’s will be unique.

BSD TCP/IP stacks diverts away from the above mechanism. BSD TCP/IP stacks increase the sequence number by 128,000 every second and by 64,000 for every new TCP connection. This as you can imagine is more predictable and hence can be easily exploited.

This attack is fairly simple to understand once the above attack is clear to you. In this attack :

So we can see that TCP reset attacks are aimed to terminate a valid TCP connection between two hosts.

Previous post: What is an IP Address? IPv4 and IPv6 Address Examples