How to Setup VirtualBox Guest Additions and Network

In the previous article Install & Create Virtual Machine, we explained how to install VirtualBox and create a Guest machine in it.

Once a guest machine is installed, the first step that everyone like to do is to configure the network for that machine. VirtualBox provides a facility to add up-to 4 Network adapter (Ethernet card) to each guest machine through the GUI.

It is similar to connecting a physical machine in a network. Outside world can directly communicate with the Guest machine. When a guest is configured for Bridged Networking, then VirtualBox uses a device driver on the host system, which can intercept and inject data through the physical network adapter present in the HOST machine.

It is a hybrid of Bridged and Internal networking. In this mode, the Guest machine can talk to each other and also with the Host machine. It will look like, all machine ( including Host and Guest Machines ), are connected to a physical network switch. The guest machine cannot communicate with the outside world too, since they are not connected via a physical interface.

So based on the need, we can actually choose between the networking modes. Now we will see how we can configure the ‘Networking’ in VirtualBox UI.

3) Choose ‘Network’. It will have the details similar to 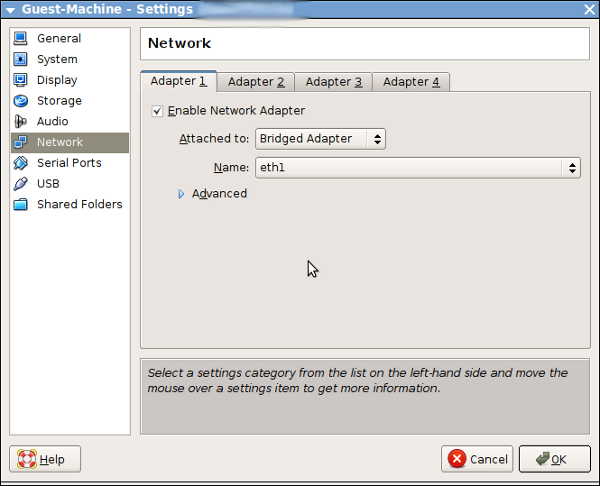 5) Attached to, will have all the above mentioned mode. Choose the one you need. Here I choose ‘Bridged Adapter’

6) If your host network has more than 2 physical Ethernet card, then choose one among them, which will be used as the interface to send/receive packets by the Guest Machine

7) The advance menu, will have the Adapter type and MAC address for the virtual interface. Change it if you need.

8). Finally, you can ‘tick’ the Cable Connected check box. This is like physically connecting the network cable to a machine. 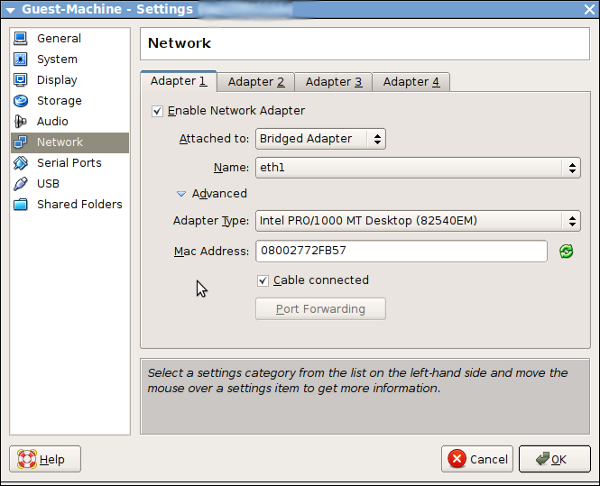 10) Now, configure the network as usual using ifconfig or ‘network-admin’ command and restart the networking services.

11) We are done with setting up a networking for a Guest machine successfully.

Guest Additions can be installed in a Virtual Machine, after installing the Operating System in it. It consists of device drivers and other applications which can optimize the performance and usability of a Virtual Machine.

The Guest Additions can provide the following features.,

Here we will see how to install guest additions in Debian Lenny, and for all flavors mostly this will be applicable.

By default under /usr/share/virtualbox/, there will be a file named, VBoxGuestAdditions.iso. We need to map this iso to the Guest machine. To do that,

4) On the ‘Storage Tree’, under ‘IDE Controller’, select the ‘Empty’ CD as shown in the following image 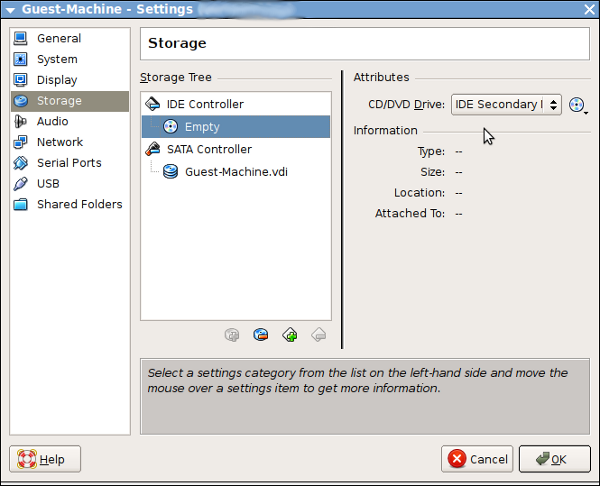 5) Now browse through the ‘/usr/share/virtualbox/’ directory, and choose the ‘VBoxGuestAdditions.iso’ file as shown below 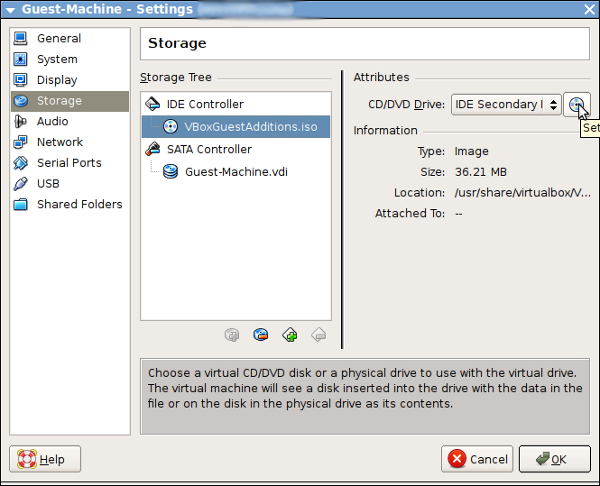 Once the Guest machine is started, you may notice some 2 mouse pointers. One for Host machine and One for Guest Machine. This often causes confusion, and we can avoid once we install the Guest Additions.

9) Mount the CD, with the help of ‘mount’ command.

10) You will see a list of files as shown below

13) Once it is installed successfully, reboot the machine.

VirtualBox also sync the time between the host and guest machine. By default, for every 10 seconds, the guest time will be reset to the host time.
You can control various timing related parameters using ‘VBoxService’ command on the guest machine.

The following illustrates the time reset by VirtualBox.

For more details with regard to Time Synchronization, please read Time Sync 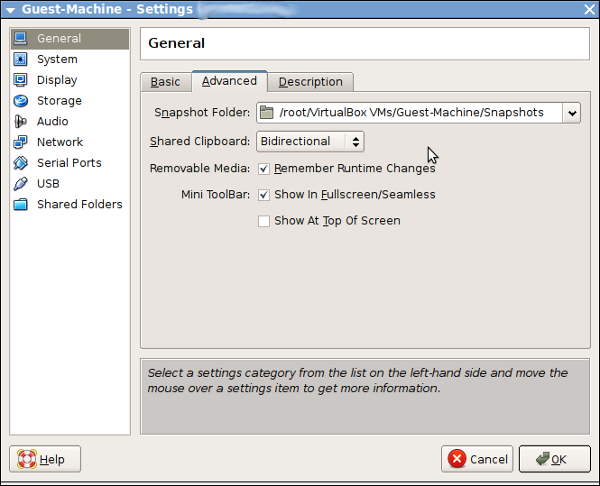 Once it is done, you can copy a document in the Guest machine, and paste the document in a file under the host machine and vice versa.

VBoxClient is the command under the Guest machine which can be used to start the VirtualBox X Window System guest services like clipboard, display, seamless windows. It will be started automatically (if guest additions are installed) when the Guest machine is booted.

Previous post: How to Setup Chroot SFTP in Linux (Allow Only SFTP, not SSH)