EMC Navisphere – How to Delete LUN and RAID Group on CLARiiON

When you are reorganizing disks or LUNs or RAID groups, you might want to sometime drop few existing LUNs (and RAID Groups) to create a bigger LUN.

We’ve already explained how to create a new RAID Group and LUN.

In this article, let us review how to delete an existing LUN (and RAID Group).

First, if a LUN that you are planning to delete is getting used, backup the data on that LUN to somewhere else, and unmount the LUN from the server.

Next, login to Navisphere, Navigate to “Storage Groups”, select the storage group where the LUN that you are planning to delete is mounted -> Right mouse-click and select properties -> Click on the “LUN” tab, which will display the following window:

From the “Selected LUNs” section, select the LUNs that you want to delete, and click on “Remove”. Please note that this will only remove the LUNs from this storage group. This really doesn’t delete the LUNs. In this example, we are planning to delete LUN 27, 28 and 29 (and also destroy the RAID group to which they belong to).

So, select these LUNs and click on Remove. This will give a warning message “This operation will remove LUN(s) from the storage group”. Click on “Yes” to continue. 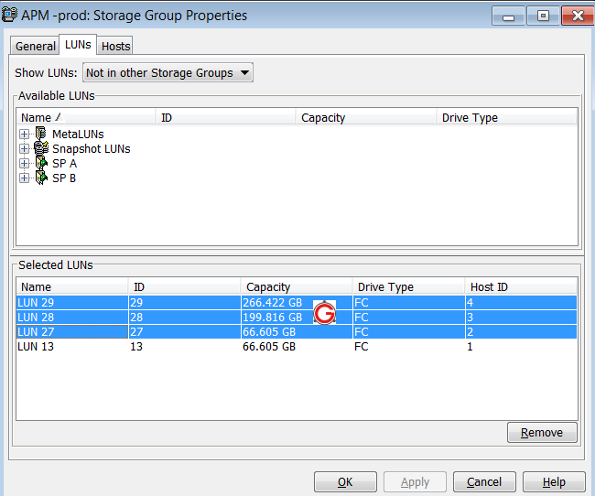 So, from Navisphere, navigate to “RAID Groups” -> “RAID Group 27” -> Expand this -> Select “LUN 27” -> Right mouse-click -> and select “Unbind LUN” as shown below. This will also give a warning message “You are about to unbind the following LUNs: LUN 27. This will destroy all data stored on these LUNs!”.

Just like the warning message says, once you Unbind your LUNs, all the data stored in those LUNs are gone forever. So, be careful with this operation, and don’t do it on a wrong LUN.

So, from Navisphere, navigate to “RAID Groups” -> select “RAID Group 27” -> Right mouse-click -> and select “Destroy” as shown below. Please note that this doesn’t have the “LUN 27” anymore under this RAID Group. 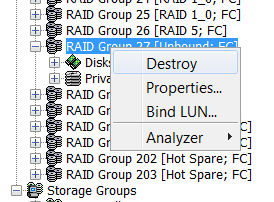 Note: If you try to delete a RAID Group that contains LUNs, it won’t let you perform this task. It will display this error message: “RAID Group 27 – Cannot destroy a RAID Group with bound LUNs”.

Next post: 7 Linux Route Command Examples (How to Add Route in Linux)