How to Compile Linux Kernel from Source to Build Custom Kernel

Linux kernel is the life force of all Linux family of operating systems including Ubuntu, CentOS, and Fedora.

For most part, you don’t need to compile the kernel, as it is installed by default when you install the OS. Also, when there is a critical update done to the kernel, you can use yum, or apt-get to update the kernel on your Linux system.

In this tutorial, we’ll explain how to compile Linux kernel from source.

Also, please note that if you just want to compile a driver, you don’t need to compile the kernel. You need only the linux-headers package of the kernel.

The first step is to download the latest stable kernel from kernel.org.

The second step is to untar the kernel source file for compilation.

The kernel contains nearly 3000 configuration options. To make the kernel used by most people on most hardware, the Linux distro like Ubuntu, Fedora, Debian, RedHat, CentOS, etc, will generally include support for most common hardware. You can take any one of configuration from the distro, and on top of that you can add your own configuration, or you can configure the kernel from scratch, or you can use the default config provided by the kernel.

The make menuconfig, will launch a text-based user interface with default configuration options as shown in the figure. You should have installed “libncurses and libncurses-devel” packages for this command to work. 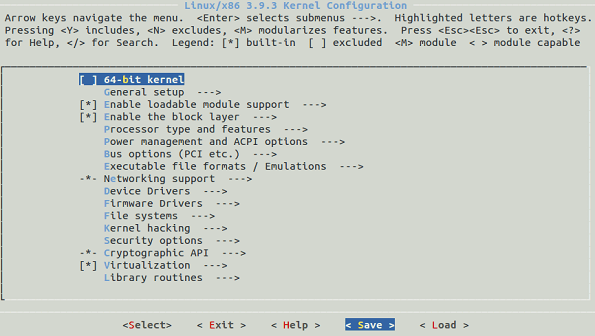 We will use the default config provided by the kernel. So select “Save” and save the config in the file name “.config”.

The following is a sample of the “.config” file:

At this point, you should see a directory named /lib/modules/3.9.3/ in your system.

Install the new kernel on the system:

The make install command will create the following files in the /boot directory.

The command “make install” will also update the grub.cfg by default. So we don’t need to manually edit the grub.cfg file.

6. Boot Linux to the new Kernel

To use the new kernel that you just compiled, reboot the system.

Since, in grub.cfg, the new kernel is added as default boot, the system will boot from the new kernel. Just in case if you have problems with the new kernel, you can select the old kernel from the grub menu during boot and you can use your system as usual.

Once the system is up, use uname command to verify that the new version of Linux kernel is installed.

Next post: How to View and Change DELL Server BIOS Settings

Previous post: How to Write C++ Virtual Functions with Examples