Virtualization is the creation of a virtual (rather than actual) version of something, such as an operating system, a server, a storage device or network resources.

For those who are new to virtualization technology, this article will give you some high level fundamentals that will help you to get started on virtualization.

The following are three high-level areas where virtualization could be done:

A Hypervisor, which is also called as Virtual Machine Monitor (VMM) or virtualization manager is another technology at the heart of system virtualization. A hypervisor provides the underpinnings for virtualization management, which includes policy-based automation, virtual hard disk, life cycle management, live migration and real-time resource allocation. It’s the software program or part of the code in firmware that manages either multiple operating systems or multiple instances of the same operating system on a single computer system. The hypervisor’s job is to manage the system’s processor, memory and other resources to allocate what each operating system requires. Hypervisors provide the means to logically divide a single, physical server or blade, allowing multiple operating systems to run securely on the same CPU and increase the CPU utilization.

Where hardware partitioning allows for hardware consolidation, hypervisors allow for flexibility in how the virtual resources are defined and managed, making it a more-often used system consolidation solution.

Type 1 Hypervisors – Native or Bare-Metal Hypervisors run directly on the host’s hardware to control the hardware and to manage guest operating systems. A guest operating-system thus runs on another level above the hypervisor. The following figure shows one physical system with a type 1 hypervisor running directly on the system hardware, and three virtual systems using virtual resources provided by the hypervisor.

An example of Type 1 Hypervisor is VMware ESXi. 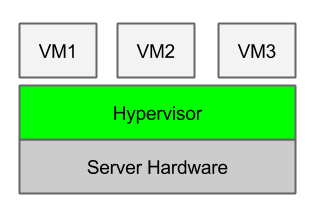 An example of Type 2 Hypervisor is VMware workstation. 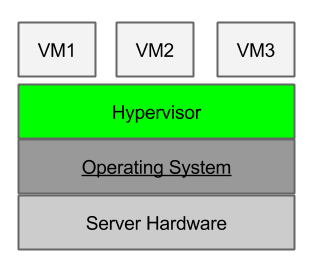 What is Server Virtualization?

Server virtualization is a technology for partitioning one physical server into multiple virtual servers. Each of these virtual servers can run its own operating system and applications, and perform as if it is an individual server. This makes it possible, for example, to complete development using various operating systems on one physical server or to consolidate servers used by multiple business divisions.

The following are two high-level important features of server virtualization:

Next post: How To Register Listeners and Handle Events in Android App Programming