How to Setup Logstash on Linux with ElasticSearch, Redis, Nginx

You can collect logs from multiple servers, multiple applications, parse those logs, and store it in a central place. Once it is stored, you can use a web GUI to search for logs, drill-down on the logs, and generate various reports.

This tutorial will explain the fundamentals of logstash and everything you need to know on how to install and configure logstash on your system.

Logstash is part of elasticsearch family. Download it from logstash website here. Please note that you should have java installed on your machine for this to work.

Note: We’ll be installing logstash using yum later. For now, we’ll inititally download the binary manually to check how it works from the command line.

To understand the basics of logstash, for testing purpose, let us quickly check few things from command line.

Execute the logstash from the command line as shown below. When it prompts, just type “hello world” as the input.

In the above output, the 1st line is the “hello world” that we entered using stdin.

The 2nd line is the output that logstash displayed using the stdout. Basicially, it just spits out whatever we entered in the stdin.

Please note that specifying the -e command line flag allows Logstash to accept a configuration directly from the command line. This is very useful for quickly testing configurations without having to edit a file between iterations.

The rubydebug codec will output your Logstash event data using the ruby-awesome-print library.

So, by re-configuring the “stdout” output (adding a “codec”), we can change the output of Logstash. By adding inputs, outputs and filters to your configuration, it is possible to massage the log data in many ways, in order to maximize flexibility of the stored data when you are querying it.

Now that we have seen how the Logstash works, Lets go ahead one more step. Its obvious that we cannot pass the input and output of everylog manually. So over come this problem we will have to install a software called Elasticsearch .

Or, use wget as shown below.

Start elasticsearch service as shown below:

Note: This tutorial specifies running Logstash 1.4.2 with Elasticsearch 1.4.0. Each release of Logstash has a recommended version of Elasticsearch to pair with. Make sure the versions match based on the Logstash version that you are running.

By default elasticsearch runs on 9200 port.

For testing purpose, we’ll still take the input from the stdin (similar to our previous example), but the output will not be displayed on the stdout. Instead, it will go to elasticsearch.

To verify elasticsearch, let us execute the following. When it asks for the input, just type “the geek stuff” as shoen below.

Since we won’t see the output in the stdout, we should look at the elasticsearch.

Go to the following URL:

The above will display all the messages available in the elasticsearch. You should see the message that we entered in the above logstash command here in the output.

Inputs, Outputs, Codecs and Filters are at the heart of the Logstash configuration. By creating a pipeline of event processing, Logstash is able to extract the relevant data from your logs and make it available to elasticsearch, in order to efficiently query your data.

The following are some of the available inputs. Inputs are the mechanism for passing log data to Logstash

The following are some of the filters. Filters are used as intermediary processing devices in the Logstash chain. They are often combined with conditionals in order to perform a certain action on an event, if it matches particular criteria.

The following are some of the codecs. Outputs are the final phase of the Logstash pipeline. An event may pass through multiple outputs during processing, but once all outputs are complete, the event has finished its execution.

Now lets ask the logstast to read the configuration file we just created using -f option as shoen below. For testing purpose, this still uses stdin and stdout. So, type a message after entering this command.

Now, let us do little bit more advanced configurations. Delete all the entries from the logstash-simple.conf file and add the following lines:

Now, execute the logstash command as shown below:

But, this time, paste the following sample apache log file entry as the intput.

The output from the logstatsh will be something similar to the following:

As you see from the above output, our input is parsed accordingly and all the values are split and stored in the corresponding fields.

The grok filter have extracted the apache log and have break up into useful bits so later point of time we can quey.

In the above configuration file:

But, we alaso need to change the conditions accordingly to parse both access and error log as shown below.

Testing is over. Now we know how Logstash works with elasticseach.

We’ll be installing the following:

Before we install, setup the following repositories:

First bring the system up-to-date and then install logstash along with elasticsearch, redis and nginx as shown below:

Install Kibana for the dashboard as shown below:

We have to tell kibana about elasticsearch. For this, modify the following config.js.

Inside the above file, search for elasticsearch and change “dev.kanbier.lan” in that line to your domain (for example: log.thegeekstuff.com)

15. Setup Kibana to run from Nginx

We also have to make kibana to run from nginx webserver.

Add the following to nginx.conf

Also, don’t forget to set the appropriate ip-address of your server in the redis.conf file.

Now we need to create a logstash config file similar to the example configuration file we used earlier.

We will be defining the log files path, which port to receive the remote logs and tell logstash about elasticsearch tool.

Start all these services as shown below:

Open a browser and go the server name (host) that used in the above configuration file. For example: log.thegeekstuff.com

You’ll see a graph something similar to the following, from where you can manipulate, browse, drill-down all the log files that are collected by the logstash. 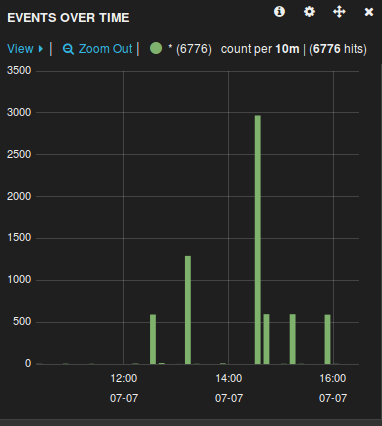 Now that the log server is ready, you just have to forward remote server logs files managed by rsyslog to this central server by modifying the rsyslog.conf file.

Next post: How to Install Windows Active Directory from PowerShell Command Line