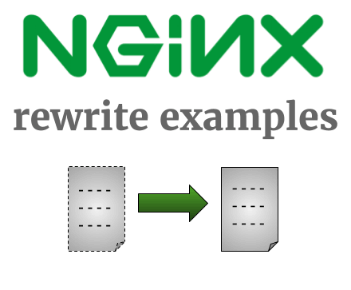 Ability to change (rewrite) incoming URL into a different URL based on your criteria is an essential feature for any webserver.

In this tutorial, we’ll explain the following examples on nginx rewrite:

The following is the syntax of nginx rewrite:

In nginx, the rewrite directive can be specified inside any one of the following three contexts: server, location, if

The following is an example of Nginx rewrite directive:

In the above rewrite rule:

While Nginx rewrite rules does similar things like Apache, there are still lot of differences in terms of how you write a rewrite rule in Nginx.

Also, if you are new to Nginx, this might help to understand the basics: Nginx Vs Apache: Nginx Basic Architecture and Scalability

Using rewrite, you can route many incoming original URL to a master controller template that will serve those request.

The following rewrite example explains this.

As you see above, any URL that has matches the pattern here (i.e /linux/ in the URL) will be served by linux.php, but the last portion in the original incoming URL will be used as an value for the distro argument in the linux.php controller.

So, the above rewrite rule will transform the incoming URL like this:

Similar to previous example, we are using $1 in the replacement string to capture anything that is inside the 1st parenthesis ( ) in the reg-ex. In this case, this is the last part of the original incoming URL.

We are also using the last flag here to instruct nginx to stop search for further rewrite directives in the current-block and move-on to the next matching location for further search.

In this example, we’ve placed the rewrite condition inside location directive.

In this example, the location directive is /data/, which also matches the $1 in the replacement string given below.

This is what would’ve happened if you used “last” flag above:

Since, we don’t want the above behavior, we’ve used “break” as the flag here which will just stop processing the rewrite blocks any further.

To use rewrite directive effectively inside location context, you need to understand the details of how location works: 13 Nginx Location Directive Examples including Regular Expression Modifiers

In the above example, when the replacement string include the incoming request arguments, then the arguments from the previous request are appended after them.

Some times, you probably don’t want that append to happen. In that case, use ? as shown below.

In the following example, in the replacement string portion of the Nginx rewrite, we’ve added ? at the end. i.e There is a question mark after $1

In the above example, replacement string include the incoming request arguments, then the arguments from the previous request are NOT appended after them.

5. If Context and Rewrite Directive

The following few examples illustrates that we can use rewrite inside the if directive.

You can do a conditional rewrite based by doing some if condition comparison using variables like $scheme, $http_host, $http_user_agent, etc, as shown below:

Please note that there are better ways to achieve the end-result of the above examples. The above examples are just given to show that we can add rewrite directive inside if statement in the nginx config file.

Please note that you can also set the value of the following two parameters to either on or off in your nginx config file:

The following are the 4 different Nginx Rewrite directive flags that you can use.

last: This flag will stop the processing of the rewrite directives in the current set, and will start at the new location that matches the changed URL.

break: This flag will stop the processing of the rewrite directives in the current set.

redirect: This flag will do a temporary redirection using 302 HTTP code. This is mainly used when the replacement string is not http, or https, or $scheme

permanent: This flag will do a permanent redirection using 301 HTTP code

By default, anytime Nginx does successful rewrite, it doesn’t log it in the error.log.

Initially when you are writing complex rewrite rules, you really want to make sure that Nginx is doing the rewrite as per your requirement.

For this, you should enable the rewrite log, which will write a log entry anytime nginx does a successful rewrite using any one of the rewrite directive in the configuration file.

For this, use the rewrite_log directive and set it to on.

Add the following two lines to your nginx default.conf:

After the above change, you’ll started seeing lines like this which clearly shows which specific rewrite rule was used in translating the incoming URL. This also will show the final translated URL in the log entry.

Previous post: How to Install LDAP 389 Directory Server On Linux with Detailed Steps