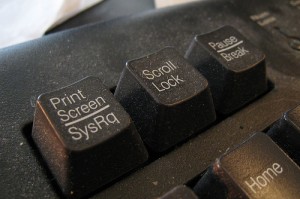 This is a guest post written by Lakshmanan G.

If you are working on kernel development, or device drivers, or running a code that could cause kernel panic, SysRq key will be very valuable. The magic SysRq key is a key combination in the Linux kernel which allows the user to perform various low level commands regardless of the system’s state.

It is often used to recover from freezes, or to reboot a computer without corrupting the filesystem. The key combination consists of Alt+SysRq+commandkey. In many systems the SysRq key is the printscreen key.

First, you need to enable the SysRq key, as shown below.

Following are the command keys available for Alt+SysRq+commandkey.

We can also do this by echoing the keys to the /proc/sysrq-trigger file. For example, to re-boot a system you can perform the following.

To perform a safe reboot of a Linux computer which hangs up, do the following. This will avoid the fsck during the next re-booting. i.e Press Alt+SysRq+letter highlighted below.


This article was written by Lakshmanan G. He is working in bk Systems (p) Ltd, and interested in contributing to the open source. The Geek Stuff welcomes your tips and guest articles.