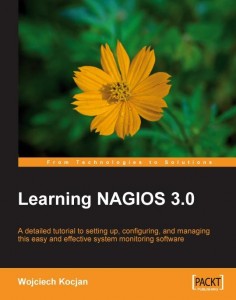 It’s Holiday Season and I have a gift for you.

As part of the first contest at The Geek Stuff, I will be giving away three copies of Learning Nagios 3.0 PDF version of the book written by Wojciech Kocjan. All you have to do is let us know your favorite Unix command with a sample usage.

For those who’ve been following this blog for a while already know that I love Nagios and I have written few article on Nagios earlier.

For beginners, Learning Nagios 3.0 book will give you an introduction to Nagios and a jumpstart on how to setup and configure Nagios 3.0. For advanced users, this book explains about the Nagios 3.0 new features and details of advanced Nagios configuration.

How to Enter the Contest?

It is very simple. Leave a comment with one of the following or both:


Three winners will be selected randomly from the comments and will receive PDF version of Learning Nagios 3.0 Book. The contest is open to everybody.  Contest End Date: Tue, Dec 23, 2008 at Midnight.

Update: Contest is closed now. Three random winners was selected from the comments.