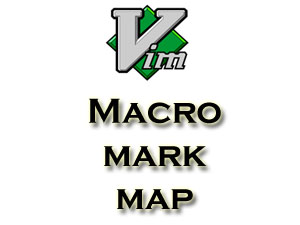 This article is written by SathiyaMoorthy

This article is part of the ongoing Vi / Vim Tips and Tricks series. There are 3 powerful M’s in VIM — Macro, Mark, and Map. Each is intended for a separate job.

In this article, let us look at various features of Vim’s Macro, Mark and Map along with practical examples.

A macro is used to record a sequence of actions inside Vim. Once recorded, it can be executed multiple times using the repeat factor in vim.

Refer to our previous Vim Macro Tutorial article for more details on how to use Macro to record and play inside Vim.

Mark is a bookmarking feature inside Vi and Vim editor, where you can bookmark a particular line and return to it quickly later. There are two types of marks — local and global.

Refer to our previous Vim Mark Tutorial article for more details on how to use Mark to bookmark inside Vim.

Using Vim Map feature, you can map a key to a particular job that you perform repeatedly.

Create a Map in Vim

In the following example, anytime you type :write , it will compile the current open *.c program file and execute the ./a.out, if the compilation is successful. 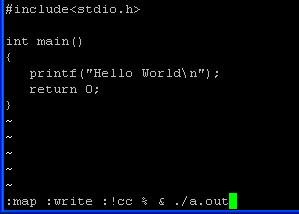 Fig: Create a map called  :write to compile a C program and execute it

Type :map that will display all the available maps as shown below.

Learning the Vi and Vim Editors

, by Arnold Robbins. I’m a command-line junkie. So, naturally I’m a huge fan of Vi and Vim editors. Several years back, when I wrote lot of C code on Linux, I used to carry the Vi editor pocket reference with me all the times. Even if you’ve been using Vi and Vim Editors for several years and have not read this book, please do yourself a favor and read this book. You’ll be amazed with the capabilities of Vim editor.

This article is part of the ongoing Vi / Vim Tips and Tricks series. Please subscribe to TheGeekStuff and don’t miss any future Vi and Vim editor tips and tricks.

This article was written by SathiyaMoorthy, developer of Enterprise Postgres Query Analyser, an efficient tool for parsing postgresql log to generate html report, which can be used for fine tuning the postgres settings, and sql queries. The Geek Stuff welcomes your tips and guest articles.