Emacs Macro Tutorial: How to Record and Play 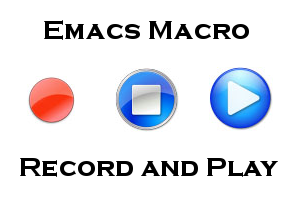 Using Emacs Macro feature you can record and play a sequence of actions inside the editor.

This article explains how to perform record and play inside Emacs editor with an example.

If you are a Vim editor fan, refer to our How to record and play inside Vim editor article.

High Level Steps to Record and Play inside Emacs

For using multiple macros, you have to name and save the macros.

High Level Steps for Naming and Saving emacs macro, and playing it later

Let us take the following text snippet as an example.

1. Open the thegeekstuff.txt that has the bullet points

Open the above sample text file, and by default the cursor will be placed in the first line.

3. Change the case of next

7. Give name and save macro

8. Execute the macro for required number of times

To repeat the macro, just prepend the macro with C-u and count.

So, now all your four lines are title cased, as shown below.

By default, emacs macro will not be available for further sessions.

Saving the macro in .emacs for future session

After you have named the macro,