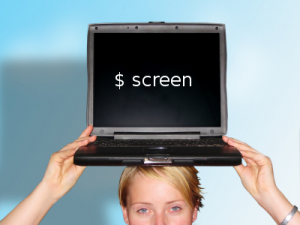 Screen command offers the ability to detach a long running process (or program, or shell-script) from a session and then attach it back at a later time.

When the session is detached, the process that was originally started from the screen is still running and managed by the screen. You can then re-attach the session at a later time, and your terminals are still there, the way you left them.

In this article, let us review the how to manage the virtual terminal sessions using screen command with examples.

Screen Command Example 1: Execute a command (or shell-script), and detach the screen

Typically you’ll execute a command or shell-script as shown below from the command.

Instead, use the screen command as shown below.

Once you’ve used the screen command, you can detach it from the terminal using any one of the following method.

When the command is executing, press CTRL+A followed by d to detach the screen.

You can list all the running screen processes using screen -ls command.

On terminal 1 you did the following:

When you are working in a team environment, you might walk over to your colleagues desk and get few things clarified. At that time, if needed, you can even start some process from their machine using screen command and detach it when you are done. Later when you get back to your desk, you can login and attach the screen back to your terminal.