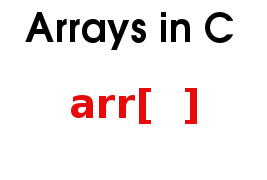 This article is part of our on-going C programming series.

There are times while writing C code, you may want to store multiple items of same type as contiguous bytes in memory so that searching and sorting of items becomes easy. For example:

C programming language provides the concept of arrays to help you with these scenarios.

An array is a collection of same type of elements which are sheltered under a common name.

An array can be visualised as a row in a table, whose each successive block can be thought of as memory bytes containing one element. Look at the figure below :

An Array of four elements:

The number of 8 bit bytes that each element occupies depends on the type of array. If type of array is ‘char’ then it means the array stores character elements. Since each character occupies one byte so elements of a character array occupy one byte each.

An array is defined as following :

For example, an array of five characters can be defined as :

3. How to Initialize an Array?

An array can be initialized in many ways as shown in the code-snippets below.

Initializing each element separately. For example :

Initializing array at the time of declaration. For example :

In the above example an array of five integers is declared. Note that since we are initializing at the time of declaration so there is no need to mention any value in the subscripts []. The size will automatically be calculated from the number of values. In this case, the size will be 5.

Initializing array with a string (Method 1):

In the above declaration/initialization, we have initialized array with a series of character followed by a ‘\0’ (null) byte. The null byte is required as a terminating byte when string is read as a whole.

Initializing array with a string (Method 2):

Here we neither require to explicitly wrap single quotes around each character nor write a null character. The double quotes do the trick for us.

4. Accessing Values in an Array

Now we know how to declare and initialize an array. Lets understand, how to access array elements. An array element is accessed as :

As we can see above, the 6th element of array is accessed as ‘arr[5]’.

The first element of array always has a subscript of ‘0’

The following program gives a brief idea of how to declare, initialize and use array of structures.

The output of the above program comes out to be :

The following program gives a brief Idea of how to declare an array of char pointers :

The output of the above program is :

Pointers in C Programming language is very powerful. Combining pointers with arrays can be very helpful in certain situations.

As to any kind of data type, we can have pointers to arrays also. A pointer to array is declared as :

The above example declares a pointer ptr to an array of 5 integers.

Lets look at a small program for demonstrating this :

Static arrays are the ones that reside on stack. Like :

Dynamic arrays is a popular name given to a series of bytes allocated on heap. this is achieved through malloc() function. Like :

The above line allocates a memory of 10 bytes on heap and we have taken the starting address of this series of bytes in a character pointer ptr.

Static arrays are used when we know the amount of bytes in array at compile time while the dynamic array is used where we come to know about the size on run time.

Internally, arrays aren’t treated specially, they are decomposed into pointers and operated there-on. For example an array like :

So we see above that the same old pointers techniques are used while accessing array elements.

Mostly new programmers get confused between character arrays and strings. Well, there is a very thin line between the two. This thin line only comprises of a null character ‘\0’ . If this is present after a series of characters in an array, then that array becomes a string.
This is an array:

This is a string:

The above declaration can be thought of as 5 rows and 10 columns. Where each row may contain a different name and columns may limit the number of characters in the name. So we can store 5 different names with max length of 10 characters each.
Similarly, what if we want to store different names and their corresponding addresses also. Well this requirement cannot be catered even by bi-dimensional arrays. In this case we need tri-dimensional (or multi-dimensional in general) arrays. So we need something like :

So we can have 5 names with max capacity of 10 characters for names and 50 characters for corresponding addresses.
Since this is an advanced topic, So we won’t go into practical details here.

Consider this simple program that copies a string into an array and then changes one of its characters :

I think the program is self explanatory as I have added plenty of comments. The output of the above program is :

So we see that we successfully copied the string into array and then changed the first character in the array.

13. No Array Bound Check in a C Program

What is array bound check? Well this is the check for boundaries of array declared. For example :

The above array ‘arr’ consumes 5 bytes on stack and through code we can access these bytes using :

Now, C provides open power to the programmer to write any index value in [] of an array. This is where we say that no array bound check is there in C. SO, misusing this power, we can access arr[-1] and also arr[6] or any other illegal location. Since these bytes are on stack, so by doing this we end up messing with other variables on stack. Consider the following example :

In the above example, we have declared an array of 3 integers but try to access the location arr[3] (which is illegal but doable in C) and change the value kept there.

But, we end up messing with the value of variable ‘b’. Cant believe it?, check the following output . We see that value of b changes from 10 to 12.