Anybody who is working on Linux environment (not just developers), should understand the fundamentals of C programming language and write some basic C program.

This article is part of our ongoing series on C programming language.

The concept of pointers is one of the most powerful fundamentals of C/C++ language.

A developer has to very carefully make use of pointers in order to avoid some problems that can be nightmare to debug.

In this article we will study the very basic concept of pointers with examples in C language. 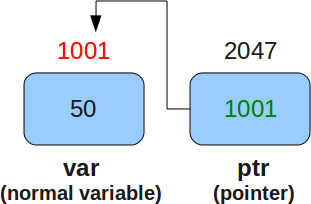 As shown in the above diagram:

How to Declare a Pointer?

A pointer is declared as :

In the above declaration :

An example of a pointer declaration can be :

How to initialize a Pointer?

A pointer is initialized in the following way :

Note that the type of variable above should be same as the pointer type.(Though this is not a strict rule but for beginners this should be kept in mind).

Note that the ‘&’ operator is used to access the address of any type of variable.

How to Use a Pointer?

A pointer can be used in two contexts.

Context 1: For accessing the address of the variable whose memory address the pointer stores.

Now, whenever we refer the name ‘chptr’ in the code after the above two lines, then compiler would try to fetch the value contained by this pointer variable, which is the address of the variable (ch) to which the pointer points. i.e. the value given by ‘chptr’ would be equal to ‘&ch’.

The value held by ‘chptr’ (which in this case is the address of the variable ‘ch’) is assigned to the new pointer ‘ptr’.

Context 2: For accessing the value of the variable whose memory address the pointer stores.

Continuing with the piece of code used above :

We see that in the last line above, we have used ‘*’ before the name of the pointer. What does this asterisk operator do?

Well, this operator when applied to a pointer variable name(like in the last line above) yields the value of the variable to which this pointer points. Which means, in this case ‘*chptr’ would yield the value kept at address held by chptr. Since ‘chptr’ holds the address of variable ‘ch’ and value of ‘ch’ is ‘c’, so ‘*chptr’ yeilds ‘c’.

When used with pointers, the asterisk ‘*’ operator is also known as ‘value of’ operator.

An Example of C Pointers

To debug a C program, use gdb. The above code covers all the common pointers. The first three of them are very trivial now to understand so lets concentrate on the fourth one. In the fourth example, a character pointer points to a string.

In C, a string is nothing but an array of characters. So we have no staring pointers in C. Its the character pointers that are used in case of strings too.

Now, coming to the string, when we point a pointer to a string, by default it holds the address of the first character of the string. Lets try to understand it better.

The string, ‘I am String’ in memory is placed as :

Since characters occupy one byte each, so they are placed like above in the memory. Note the last character, its a null character which is placed at the end of every string by default in C. This null character signifies the end of the string.

Now coming back to the point, any character pointer pointing to a string stores the address of the first character of the string. In the code above, ‘ptr’ holds the address of the character ‘I’ ie 1001. Now, when we apply the ‘value of’ operator ‘*’ to ‘ptr’, we intend to fetch the value at address 1001 which is ‘I’ and hence when we print ‘*ptr’, we get ‘I’ as the output.

In the above code, we have declared a pointer stobj of type ‘struct st’. Now since the pointer type is a structure, so the address it points to has to be of a ‘struct st’ type variable(which in this case is ‘obj’). Other interesting part is how structure elements are accessed using pointer variable ‘stobj’. Yes, When dealing with pointer objects, its a standard to use arrow operator -> instead of ‘.’ operator(which would have been used, had we used ‘obj’ to access the structure elements).

To conclude, In this article we studied the concept of pointers in C from scratch and then slowly built upon our understanding to more complex topics like using pointers as structure objects. This was a basic tutorial, we will cover more complex pointer concepts in the part-II of this article. (Part 2: Advanced C pointers).

Previous post: How to Setup and Configure YPServ Linux NIS Server and Client