What is Linux System Calls and Library Functions?

Computer software are developed to either automate some tasks or solve some problems. Either way, a software achieves the goal with the help of the logic that the developer of that software writes. Every logic requires some services like computing the length of a string, opening a file etc. Standard services are catered by some functions or calls that are provided for this purpose only.

These standard functions can be classified into two major categories :

In this article, we will try to discuss the concept behind the system and library calls in form of various points and wherever required, I will provide the difference between the two.

The functions which change the execution mode of the program from user mode to kernel mode are known as system calls. These calls are required in case some services are required by the program from kernel. For example, if we want to change the date and time of the system or if we want to create a network socket then these services can only be provided by kernel and hence these cases require system calls. For example, socket() is a system call.

2. Why do we need system calls?

Library functions can be of two types :

The following diagram to depict how Library functions, system calls, application code interact with each other. 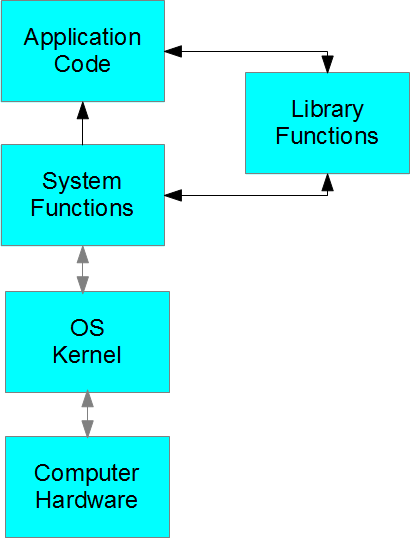 The diagram above makes it clear that the application code can interact with Library functions or system calls. Also, a library function can also call system function from within. But only system calls have access to kernel which further can access computer hardware.

Some of us may argue that why do we have two functions for the same operation ie opening a file?

Traditionally, the mechanism of raising an interrupt of ‘int $0x80’ to kernel was used. After trapping the interrupt, kernel processes it and changes the execution mode from user to kernel mode. Today, the systenter/sysexit instructions are used for switching the execution mode.

Besides all the above, here are a few more differences between a system and library call :