It was created in 1988. The purpose of its creation was to manage a growing number of network elements in a computer network. Slowly, this protocol started becoming popular and it forms the basis of network management today.

This article is the first part on our ongoing series on SNMP.

Not only information can be retrieved but also these network devices can be configured with new values through snmp. Despite being simple in its design and approach, its the sheer power of this protocol that makes its popular network management protocol today.

A computer network system that uses SNMP for network management consists of the three fundamental components :

The definition of SNMP MIB can be a bit cryptic to newbies. So lets understand the concept of SNMP MIBs through a small example here.

Suppose a mobile company server sends a poll question to all the company’s subscribers through SMS. Being that company’s subscriber, you get that message on your phone and you reply to it. Simple enough. Now, assume a situation where in a next poll the same company sends MMS this time. But, this time your phone is not able to comprehend that SMS due to some of its technology limitations (or any other problem). So, in this case you won’t be able to receive and hence reply to the MMS.

So we see that the problem above happened because of lack of some MMS capabilities on your phone. So, in a nutshell your phone was not able to comprehend the incoming message successfully.

One could assume that same is the case with SNMP manager and an SNMP agent. The network protocol used between them is of-course SNMP but there has to be a protocol for composing and comprehending the information being queried. The information being queried could be anything like the disk usage of the network node that has agent running on it. So the crux is that there should be a standard structure in which the the query should be formed by the SNMP manager and the query should be understood by the SNMP agent.

The very basic component of the structure used in case of SNMP is an object. Every information that can be queried through SNMP is looked in terms of an object. For example the a system’s up time is an object known as ‘sysUpTime’. Every object is has an associated ID known as Object ID or OID which is unique for every object. A group of objects form a MIB.

For example, if you take a look at the following image : 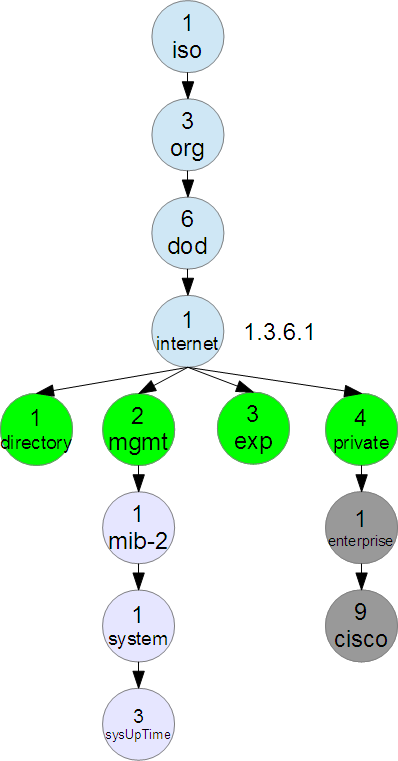 You will see that the whole information system in SNMP is in a form of tree where individual information nodes are objects having unique OIDs. For example the unique OID for the object sysUpTime is .1.3.6.1.2.1.1.3.0 . Looking at the figure above, you can easily deduce this OID. The ‘0’ at the last of OID signifies that this object is a scalar and not a table.

SNMP communication between manager and agent takes place in form of messages. Following are the basic messages used for communication :

At the transport layer, the protocol used for SNMP message transportation is UDP. This is because UDP outperforms TCP in lossy networks where congestion is usually very high. One thing to remember is to fine tune the time-outs of UDP to fetch the best performance in lossy networks.