What is DNS and How DNS Works? (Domain Name Server Fundamentals)

DNS resolves an IP address to a hostname or vice versa.

DNS is basically a large database which resides on various computers that contains the names and IP addresses of various hosts/domains. Other than ip-address DNS also associates various information with the domain names.

Structure of a DNS

DNS uses a hierarchical tree based name structure. At top of the tree is the “root” ( represented as a dot (.) ) followed by the TLD ( Top Level Domain ), then by the domain-name and any number of lower level sob-domains separated by a dot.

The Top Level Domains are divided into 2 categories:

Below are some of the common Generic Top Level Domains:

Below are some fo the Country Code Top Level Domains:

The following shows a sample representation of the structure of the DNS tree: 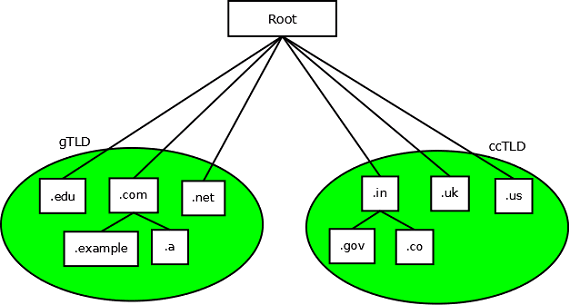 The Authority for the root domain and gTLD lies with Internet Corporation for Assigned Numbers and Names (ICANN). ccTLD’s are delegated to individual countries for administration purpose. Each level in the hierarchy may delegate the authoritative control to the next lower level. There is a DNS server running in every level of the hierarchy and the responsibility of running the DNS server lies with the Authority at that level.

For Example, when the root domain gets a DNS query for www.example.com, the root will delegate responsibility for resolving to its lower level “.com”, which in-turn will delegate to “example”. Finally the DNS server in the “example” will respond with the IP address of the hostname “www”.

A DNS zone database is made up of a collection of resource records. Each resource record specifies information about a particular object. The DNS server uses these records to answer queries for hosts in its zone. For example, address mapping (A) record, map a host name to an IP address, and reverse-lookup pointer (PTR) records map an IP address to a host name. Here are some of commonly used Resource Records.

You can use dig command to query DNS server and view the above information.

The following are the three types of DNS queries:

In Recursive query, the following are the steps involved when a host queries its local DNS server for ‘a.example.com’.

In Inverse query, an IP address will be provided and a hostname will be asked.