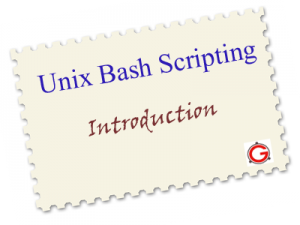 Similar to our on-going Unix Sed and Unix Awk series, we will be posting several articles on Bash scripting, which will cover all the bash scripting techniques with practical examples.

Shell is a program, which interprets user commands. The commands are either directly entered by the user or read from a file called the shell script.

Shell is called as an interactive shell, when it reads the input from the user directly.

Shell is called as an non-interactive shell, when it reads commands from a file and executes it. In this case, shell reads each line of a script file from the top to the bottom, and execute each command as if it has been typed directly by the user.

Print the value of built in shell variable $-, to know whether the shell is an interactive or non-interactive.

Note: $- variable contains an “i” when the shell is interactive.

Unix has variety of Shells. Bourne shell (sh), Bourne again shell (bash), C shell (csh), Korn shell (ksh), Tenex C shell (tcsh). Use the which or whereis unix commands to find out where a specific shell is located as shown below.

You can switch between the shells, by typing the shell name. For example, type csh to switch to C shell.

Writing and execution of shell script

As we discussed earlier in our execution sequence for .bash_profile and related files article, when the bash is invoked as an interactive shell, it first reads and executes commands from /etc/profile. If /etc/profile doesn’t exist, it reads and executes the commands from ~/.bash_profile, ~/.bash_login and ~/.profile in the given order. The –noprofile option may be used when the shell is started to inhibit this behavior.

Typically your bash_profile executes ~/.bashrc. If you like, you can show a welcome message. This only runs when you first log in. You can export the variables whatever you want, and you can set the aliases which will be running and available once you opened the shell. When a login shell exits, Bash reads and executes commands from the file ~/.bash_logout.

Example 2. Print a welcome message when you login

Type the following contents in your bash_profile file. If the file doesn’t exist, create a file with the below content.

When you login to an interactive shell, you will see the welcome messages as shown below.

When you login to an interactive shell, you can show the name of the kernel installed in the server, bash version, uptime and time in the server.

When you launch an interactive shell, it prints the message as shown below.

If multiple users are using the same machine with same login, then details like the machine from which the last login happened, and time at which they logged in, would be the most useful details. This example prints the last login details during the starting of an interactive shell.

Next post: How to Open Multiple Websites (tabs) in Firefox during Startup?

Previous post: 30 Things To Do When you are Bored and have a Computer