Keeping You in the Loop – Bash For, While, Until Loop Examples 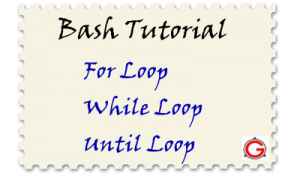 Looping statements are used to force a program to repeatedly execute a statement. The executed statement is called the loop body.

This article is part of the on-going Bash Tutorial series.

Loops can be nested. Like any other programming language, bash also supports break statement to exit the current loop, and continue statement to resume the next iteration of the loop statement.

For loops are typically used when the number of iterations is known before entering the bash loop. Bash supports two kinds of for loop. The first form of bash for loop is:

In the above syntax:

In this form, the for statement executes the command enclosed in a body, once for each item in the list. The current item from the list will be stored in a variable “varname” each time through the loop. This varname can be processed in the body of the loop. This list can be a variable that contains several words separated by spaces. If list is missing in the for statement, then it takes the positional parameter that were passed into the shell.

Bash For Loop Example 1. Unzip all the Zip file

The following example finds the list of files which matches with “*.zip*” in the root directory, and creates a new directory in the same location where the zip file exists, and unzip the zip file content.

Similar to the Bash loop, Awk also provides for loop and while loop as we discussed in our Awk While and For Loop article.

The second form of for loop is similar to the for loop in ‘C’ programming language, which has three expression (initialization, condition and updation).

The following example generates the n number of random numbers.

In the above code snippet, the for loop generates the random number at max number of times. RANDOM is an internal bash function that returns a random integer at each invocation.

Another iteration statement offered by the shell programming language is the while statement.

In the above while loop syntax:

Bash While Example 3. Write contents into a file

The following example reads the data from the stdout and writes into a file.

The above example, reads the filename from the user, and reads the lines of data from stdin and appends each line to a given filename. When EOF enters, read will fail, so the loop ends there.

If you are writing lot of bash scripts, you can use Vim editor as a Bash IDE using the Vim bash-support plugin as we discussed earlier.

Bash While Example 4. Read the contents of a file

In this example, it gets the filename to read, and using exec it redirects stdin to a file. From that point on, all stdin comes from that file, rather than from keyboard. read command reads the line from stdin, so while loop reads the stdin, till EOF occurs.

In the above bash until syntax:
where until, do, done are keywords
expression any conditional expression

Bash Until Example 5. Monitor the logfile

This example monitors the size of the logfile, once the logfile size reaches 2000bytes, it takes the copy of that logfile.

The until statement continues to execute the body of the loop, till the condition becomes true. In this example condition is size of the file greater than 2000 bytes, so it copies the file once it reaches the 2000 bytes.

Also, make sure to refer to our earlier Bash Array examples.

Bash Until Example 6. Waiting for the Machine to come up

This example is used to wait till the machine comes up before doing a ssh to that machine. The until loop statement ends only when the ping gives the responses.

Until loop is quite useful at the command line, as a way of waiting for certain events to occur.