Intro to Linux KVM (Kernel Based Virtualization) and its Benefits

In simple terms, virtualization is a simulated platform or environment on top of a host node, which is quite abstract for an user.

These simulated virtual environment can be an operating systems, or some development environment, etc.

This gives us the ability to efficiently use the hardware resources of the host node.

KVM stands for Kernel Based Virtualization.

During initial stages of development of virtualization technology the CPUs where fully emulated by the software which eventually lacked in performance because of absence of direct hardware access.

These days, the CPUs in market supports the virtualization which is the result of the change in their architecture from the earlier stages.

If you are totally new to virtualization, this is a good place to start, where we’ve explained the three areas of Virtualization, and two types of hypervisors: Introduction to Server Virtualization Technology and Hypervisor Types

The following are various approaches that were followed during the early development stage of the virutalization technology.

The kernel based Virtualization leverages the advantages of 3rd and 4th approach mentioned above.

What is a Hypervisor?

A Hypervisor is nothing but a middle layer of program, between the guest operating system and host systems hardware.

It manages the actual hardware for all the connecting guest operating systems.

The hypervisors can be of two types: native or hosted. The hypervisors are also called as VMMs-[Virtual Machine managers]. Please refer the figure below. It represents a bare-metal native hypervisor. 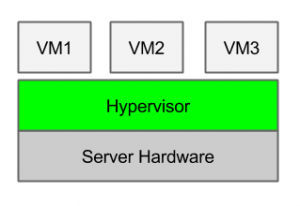 Good examples of hosted hypervisors can be VMware or virtual box software.

If you are new to VMWare, this will help: VMware Virtualization Fundamentals – VMware Server and VMware ESXi

If you are new to Virtualbox, this is a good place to start: How to Install Oracle VM VirtualBox and Create a Virtual Machine

So, as a modern solution for the effective virtualization, kernel based virtual machine (KVM) evolved.

It essentially uses the CPU extensions provided by modern hardware virtualization supporting CPUs, by a module with the kernel of host operating system.

By use of this kernel based virtualization module, the kernel of the host operating systems works as a hypervisor leveraging the features of Linux kernel and the hardware supporting the virtualization.

So to compare KVM with XEN and QEMU, we can say, KVM uses the processor extension for virtualization whereas QEMU works with complete emulation of the CPU on the other hand XEN works as an external hypervisor to the host operating system instead of using kernel for it.

Using KVM we can run multiple virtual machines with any operating system, on a single machine or say the host system. KVM is introduced in Linux Kernel since 2.6.20 stable release. Good Example of KVM is the virtualization solution coming with RPM based Red Hat and Fedora distributions.

If you are new to Linux KVM, this will help you to get started: How to Install Linux KVM and Create Guest VM with Examples

The following are some of the features and benefits of Kernel based virtualization.

Next post: C Program Example to Generate Cluster of Dots