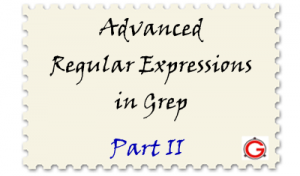 The regex will try all possible permutations of the regex, in exactly the same order. The result is that the regex-directed engine will return the leftmost match.

In this article, let us review some advanced regular expression with examples.

The following example will remove three various kind of comment lines in a file using OR in a grep command.

The file called “comments” has perl,VB script and C programming comment lines. Now the following grep command searches for the line which does not start with # or single quote (‘) or double front slashes (//).

As we have seen in our previous regex article example 9, list of characters can be mentioned with in the square brackets to match only one out of several characters. Grep command supports some special character classes that denote certain common ranges. Few of them are listed here. Refer man page of grep to know various character class expressions.

These are always used inside square brackets in the form [[:digit:]]. Now let us grep all the process Ids of ntpd daemon process using appropriate character class expression.

A regular expression followed by {m,n} indicates that the preceding item is matched at least m times, but not more than n times. The values of m and n must be non-negative and smaller than 255.

The following example prints the line if its in the range of 0 to 99999.

The file called “number” has the list of numbers, the above grep command matches only the number which 1 (minimum is 0) to 5 digits (maximum 99999).

A Regular expression followed by {m} matches exactly m occurences of the preceding expression. The following grep command will display only the number which has 5 digits.

A Regular expression followed by {m,} matches m or more occurences of the preceding expression. The following grep command will display the number which has 5 or more digits.

Note: Did you know that you can use bzgrep command to search for a string or a pattern (regular expression) on bzip2 compressed files.

\b is to match for a word boundary. \b matches any character(s) at the beginning (\bxx) and/or end (xx\b) of a word, thus \bthe\b will find the but not thet, but \bthe will find they.

Grouping the expressions for further use is available in grep through back-references. For ex, \([0-9]\)\1 matches two digit number in which both the digits are same number like 11,22,33 etc.,

In the above grep command, it accepts the input the STDIN. when it reads the input “abc” it didnt match, The line “abcabc” matches with the given expression so it prints. If you want to use Extended regular expression its always preferred to use egrep command. grep with -e option also works like egrep, but you have to escape the special characters like paranthesis.

Note: You can also use zgrep command to to search inside a compressed gz file.

So far we have seen different tips in grep command, Now using those tips, let us match “object oriented” in various formats.

The above grep command matches the “OO”, “object oriented”, “Object-oriented” and etc.,

The following grep command print all lines containing a vowel (a, e, i, o, or u) followed by a single character followed by the same vowel again. Thus, it will find eve or adam but not vera.

In the regular expression given above, there are different conditions. These conditioned matches should occur three times and one more class is mentioned separately.

For the 1st part of this article, read Regular Expressions in Grep Command with 10 Examples – Part I

Next post: Expect Script Tutorial: Expressions, If Conditions, For Loop, and While Loop Examples